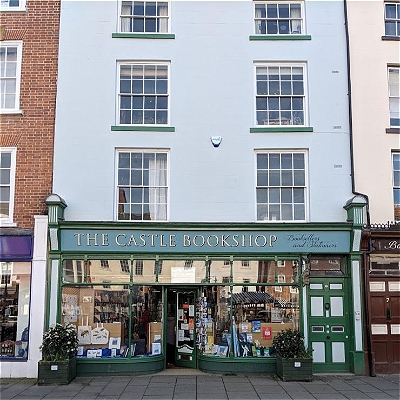 Castle Bookshop in Ludlow was opened by Mr and Mrs Bell in 1949. Mr Bell had worked in publishing in London and looked after the books and Mrs Bell oversaw the stationery, greetings cards and ‘fancy goods’. It continued under their son Peter ‘Clanger’ who expanded and modernised the shop several times in the 1970s and 1980s. Peter had a great interest in local history and built up a reputation for local history books for which it is still well known. After the death of Peter in 1997 the shop was taken over by Stanton Stephens who had worked at the shop since 1989. The shop has recently had a refurbishment but we still try to keep the feel and the ethos that the Bell family established all those years ago. Stanton is helped by Mike (who has been with the firm over over 25 years) Alma and Pete.
Venue Details

Events at this Venue
Venues nearby
×
×

Talking to the Box Office...